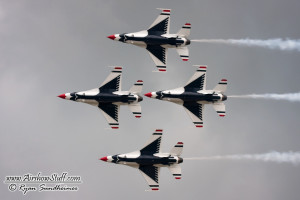 The 41st edition of the Vectren Dayton Airshow will occur June 20-21st, 2015 at the Dayton International Airport. In an interview with WDTN, Michael Emoff, Chairman of the USATS Board of Trustees, the governing organization of the event, said the June date is “a little cooler and positions us well for scheduling by the popular U.S. military jet teams.”

Organizers hope to have the USAF Thunderbirds attend the show in 2015. In the past, the Vectren Dayton Airshow has featured the U.S. Navy Blue Angels, USAF Thunderbirds and the Brazilian Smoke Squadron along with countless civilian performers. The Thunderbirds will announce on December 9th at the ICAS convention which shows they will attend in 2015.