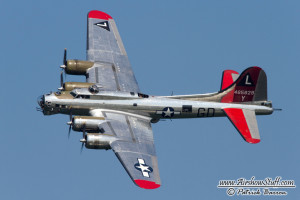 The theme “Bombertown USA” for the 2015 Thunder Over Michigan airshow has been announced. Scheduled to be held August 29th-30th, 2015, Thunder over Michigan each year puts on a great display of warbirds, military jets and civilian performers. It seems likely with today’s announcement that warbird fans will be delighted with the lineup! The U.S. Navy Blue Angels will also be performing for the third time, their first appearance at the show since 2011 when they celebrated the Centennial of Naval Aviation. The Blue Angels were unable to perform in 2013 due to sequestration.

Thunder Over Michigan has a reputation among fans for being one of the top warbird airshows in the US each year. Check out our “5 Things About” recap of the 2014 airshow here.

For more information on the event or to purchase advanced tickets in November, check out their website at YankeeAirMuseum.org/airshow