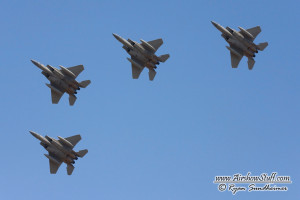 The United States Air Force announced today that they will resume flyovers at select major sporting events in October.

Back in March 2013, Sequestration grounded all flyovers and airshow demonstrations. In September of last year, airshow performances by the USAF Thunderbirds and F-22 Raptor were approved for 2014, but the Air Force outreach budget was cut about 45% overall. This limited any flyovers. In the past, over 1,000 events nationwide had flyovers.

Judging by this statement, it seems that while some flyovers will resume, there won’t be many of them and it’s not back to the old days. However, it’s nice to see flyovers resume to some degree!

The following events will have a flyover from the USAF:

Information from the Air Force Times contributed to this blog post.