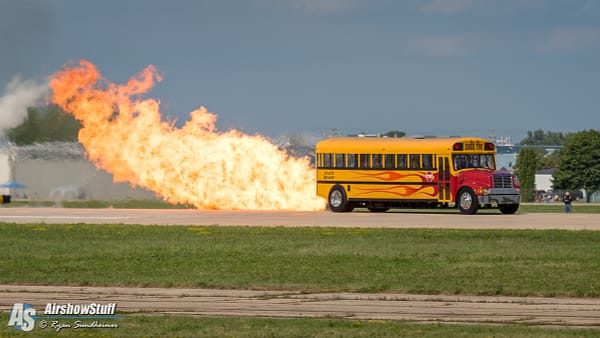 Earlier this year, we had the fantastic opportunity to go out to the runway with Paul and Therese Stender of Indy Boys Inc. at the Battle Creek Field of Flight Airshow and Balloon Festival. You might recognize their names, but you certainly would recognize the vehicle; the world famous “School Time” jet-powered school bus!

There is actually very little school bus left in “School Time”; the cabin has bucket racing seats for just the driver and three lucky passengers, all with five-point safety harnesses and surrounded by a beefy roll cage. The area behind the seats is really just a shell covering for the massive J79 engine along with tanks for fuel and smoke oil. The entire assembly sits below the window line, leaving a lot of free space. At the back sit two parachute canisters for slowing the beast after the high speed run.

The bus does not have a traditional engine any more, so it needs to be towed until it’s time to start the jet up. Thus, the first part of the performance (after donning the mandatory Nomex racing suits) is to hook up the airshow-provided pickup truck and pull the bus out towards the runway. We were actually with Paul and Therese for two performances that day, and each had its own timing cue for them to meet.

The first performance saw Paul matched up with aerobatic pilots Rob Holland and Jack Knutson at the conclusion of their Firebirds routine. We staged just short of the 500-foot aerobatic show line, which meant plenty of buzz passes from the aircraft. Right on cue, Paul fired up the bus and cruised out to the runway, billowing smoke and flame to announce his presence. Rob and Jack had great fun buzzing both the bus and us, standing at the side of the runway. They flew just a few feet off the ground, right past the bus and through its smoke. Rob in particular made it a point to angle right for us when he could. For his part, Paul kept blowing huge fireballs from the bus and kicking the afterburner in just long enough to get a loud BOOM. After several minutes of this taunting, Paul lined the bus up and Therese took control, keeping an eye on Jack as he swung out wide. This was the big finale. Jack dove in on the runway, then flipped upside down. As he pulled even with Paul, Therese gave the signal and the bus rocketed away in full afterburner, looking to catch up to and pass the airplane. Meanwhile, Rob had positioned himself at the other end of the runway and was speeding head on towards them both! The three vehicles all met at show center as we hustled to jump in the chase car and speed down the runway. Not one to let an opportunity pass him by, Rob dove in behind the pickup, zipping overhead to give us one last haircut. As we pulled alongside the bus, now shut off but still hot, it was a quick operation to disconnect the parachutes and reattach the tow strap for the journey back to the parking spot.

Paul performed again later that afternoon, this time with Skip Stewart and Kyle Franklin in an act sometimes referred to as “The Immortals”. This performance is more choreographed than the earlier one, and the start cue was a stop watch. The flying and driving was very similar, but ground pyrotechnics were added to the mix. Large explosions went off every time Kyle and Skip crossed. The big finale was again a race/game of chicken combo, but the goal was to have a 3-way cross at show center directly in front of the wall of fire. The timing had to be perfect, so the pressure was on Therese to get the signal right. Kyle dove in from behind, Therese dropped her arm, Paul lit the afterburner, and away they went. Skip was already headed right for them from the far end of the runway. From our seats on the runway it sure looked like they nailed it!

We have to thank Paul and Therese for the opportunity to film with them, and also the Battle Creek Field of Flight Airshow and Balloon Festival for making it possible!