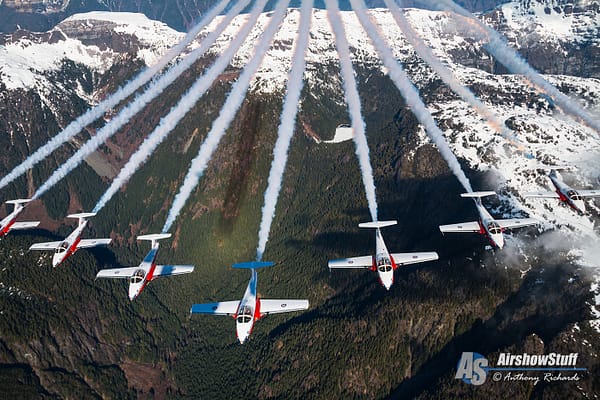 For the past few weeks, the Canadian Forces Snowbirds and CF-18 Hornet demo teams have been ripping up the skies over Comox, BC, practicing their routines for the upcoming air show season, now just around the bend. We were lucky enough to participate in observing their practices and operations last week, and even a unique air-to-air photo op!

View all of the photos from Comox in our photo gallery: Canadian Snowbirds/CF-18 Hornet Air to Air and Comox Practice

Winter training takes part at CFB Comox on Vancouver Island as the base offers both teams the chance to practice over land and water with the Strait of Georgia just beyond the base perimeter. To the east are the majestic peaks of the Beaufort Range offering additional practice opportunities. While at Comox, both teams will fly at least once nearly every day, rain or shine. The wind and rain were heavy during last Thursday’s practice and both teams went out; the Snowbirds over Air Force Beach and the CF-18 over the base, both performing low shows.

Both teams have maneuvers to perfect in their routine. Thorough debriefs follow each practice, where the team reviews their entire performance and critiques each maneuver to correct mistakes, some not even visible to observers on the ground. Each member of the Snowbirds is tasked with progress reports during the debrief to pass along any improvements or struggles they have had since the last practice. Flying the routines is only one element of the practice for the team. Simulator training also occurs, practicing taxi maneuvers and close proximity parking to perfect the ground performance as well. These practices develop the team into the fantastic performers we love to see each season.

This year, the Snowbirds are changing things up a bit. For shows with adequate runway length and fair weather, the team will depart in a 5 jet/4 jet formation takeoff, as opposed to their traditional 3/3/3 formation. You’ll also notice some new maneuvers such as the Card Nine and the Double-Take (as seen above) inserted into their performance this year.

As we reported previously, this year’s CF-18 demonstration aircraft is wearing a gorgeous camouflage scheme honoring the 75th anniversary of the Battle of Britain. But you may not have known that there’s quite an interesting history behind the paint scheme chosen to adorn this year’s Hornet. The scheme matches that of a Hawker Hurricane Mk. I belonging to No. 1 Fighter Squadron RCAF, later renamed 401 Fighter Squadron, piloted by F/L Gordon R. MacGregor. From Jim Belliveau, the graphic artist who designed and painted the aircraft:

“The serial identifier used of YO-H was not only piloted by MacGregor… it was the first RCAF aircraft to score a confirmed kill in the battle.

I could go on in detail about the rationale behind the two murals, but the decision to feature the iconic pics of St. Paul and the London dockyards is rather subjective, and you may not want to… go there.

In my mind the St. Paul mural depicts the ultimate hope that good will always triumph over evil. And as to the dockyards, both that industrial area of London, and collaterally the working class who lived there, took a disproportionate amount of the bombing campaign in the war. It is my small tribute to those wonderful East Enders who were the quiet unsung heroes of the battle.”

The practices at Comox are not only an opportunity for the teams to practice their flights, it is also one of the first opportunities for the public to get a glimpse of the team. The people of Comox and Courtney, BC flock to the shores of Air Force Beach for a free air show that truly looks amazing. The Cascades on the mainland just across the water offer a spectacular scenic backdrop and the lighting in the afternoon is excellent.

CFB Comox operations continue as normal during these practice weeks. The base is home to RCAF 19 Wing consisting of 407 Maritime Patrol Squadron, one of only two squadrons that operate CP-140 Auroras, and 442 Transport and Rescue Squadron, operating the CC-115 Buffalo and CH-149 Cormorant. Search and rescue operations and regular missions along the coastline of British Columbia carry on while hosting the teams. Comox also serves as a forward operations base for CF-18 Hornets deployed to the region.

On April 28, the teams flew their acceptance shows over Comox and on the 29th they headed back to their bases to prepare for their upcoming first shows. The CF-18 will quickly be heading south to Chino, CA for the Planes of Fame air show this weekend (May 1-2) while the Snowbirds will be heading to Dallas, GA with the CF-18 for the Salute America Airshow on May 9-10. Be sure to check the CF-18 and Snowbird schedules to find out where you can see them perform this year!

Special thanks to: Lt. Patricia Brunelle and Lt. Mathew Strong for the help in covering their team’s practices, 442 squadron for the CC-115 ride and photo ship, and the Canadian Armed Forces for letting this Yank visit.