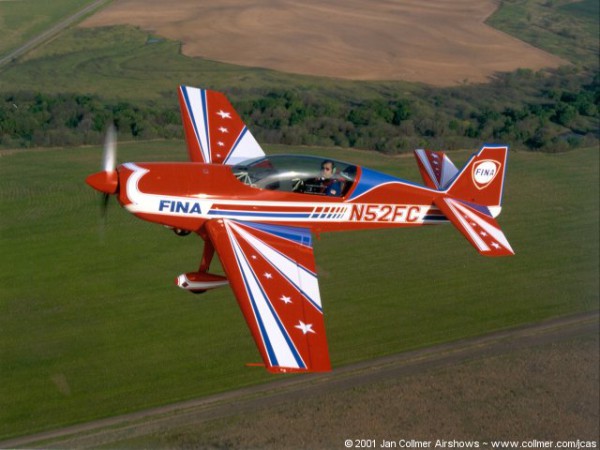 The airshow industry mourns the loss of Jan Collmer, a long time airshow performer who passed away Tuesday morning. Jan was known for flying his red, white, and blue Extra 300-L at airshows across the nation. In recent years, his schedule primarily included airshows in Texas and at NAS Pensacola in Pensacola, FL.

Jan’s flying career over the years stretched from the Navy, where he flew the Grumman F9F-2 Panther, Grumman F9F-6 Cougar, McDonnell F2H-2 Banshee, North American FJ-3 and FJ-4B Fury and Chance Vought F8A Crusader to airshow flying in his Extra 300-L, which he started in 1978. Having flown over 400 shows in his German built Extra 300L, Jan was certainly a true airshow professional.

At each airshow, Jan gave the airshow announcer a laminated copy of his biography. In it, his motivation for flying airshows was listed, stating “his strongest motivation for airshow flying is to motivate young people towards careers in aviation and technology.”

When he wasn’t flying airshows, Jan was a successful business man. He worked in the semiconductor field for almost 45 years until his retirement as Owner and President of Collmer Semiconductor Inc and High Voltage Power Systems, both high tech companies located in the Dallas area. He was also a former Chairman of the Board at Dallas/Ft. Worth International Airport and a founder of the Frontiers of Flight Museum at Dallas Historic Love Field.

AirshowStuff expresses our deepest condolences to the family and friends of Jan Collmer. Blue skies, Jan.