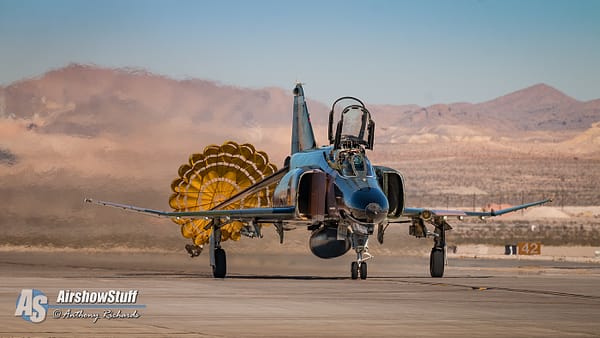 We’ve been talking about it nearly all year, and now the details of the F-4 Phantom II’s final flight in US military service are being made public. Holloman AFB, where the remaining F-4s of the 82nd Aerial Targets Squadron (Det 1) reside, has announced that they will fly for the last time on December 21st, 2016. Luckily, the ceremony will be open to members of the public who wish to see this legendary fighter roar into the skies one last time.

Details from the announcement:
8 am – La Luz Gate** opens to attendees (attendees will be directed to designated parking areas and then bused to the event)
8 am – Community expo opens to include static aircraft such as the QF-4 and QF-16
10 am – F-4 Phantom II takeoff and final flight (tentative)
11:30 am-12 pm – F-4 Phantom II retirement ceremony
1 pm – Event conclusion

**The La Luz gate is the only gate open for non-DOD cardholders and public access.

We are working on getting details about the actual flying, but previous discussions of the event have included talk of a four-ship formation as well as supersonic passes. It seems likely that other units at the base will be conducting flight operations during the open house, so there may be some bonus action to see.

It’s important to note that attendees must RSVP with the 49th Wing Public Affairs office by calling 575-572-7381 or by emailing 49wg.paoffice@us.af.mil. RSVPs may be accepted through their Facebook page as well. Also, large bags and containers will be prohibited due to security concerns. No word yet on what constitutes a ‘large’ bag, but plan accordingly.

Further updates will be posted to the event Facebook page.