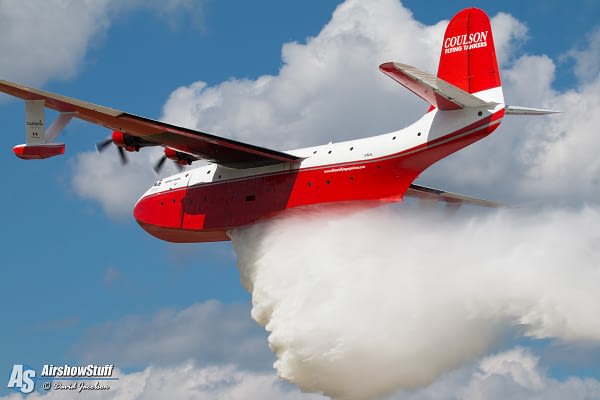 The famous Martin Mars water bomber was one of the main attractions at EAA AirVenture this year, but it did not survive the show unscathed. The aircraft, which performed in the Monday, Wednesday, and Friday airshows, suffered a bird strike to one of its four engines on Friday. In the ensuing landing on Lake Winnebago, it hit a rock that tore a basketball-sized hole in the flying boat’s hull. The damage forced the plane to miss its planned Saturday airshow appearance, but after extensive pumping and some repair work, it was able to fly home and did so on Tuesday, August 2nd.

The “Hawaii Mars II”, the aircraft showcased at AirVenture, is the lone flying example remaining of the type. Only seven aircraft were built in the 1930’s and 1940’s, with with most destroyed or scrapped long ago. She is owned by Coulson Flying Tankers in British Columbia, and has been used to fight wild fires in the region. A second intact Mars, named “Phillipine Mars”, is also owned by Coulson but does not currently fly. Phillipine Mars is painted in the colors she wore during her service in the US Navy as a long range patrol aircraft. There was previously a deal in place to send her to the National Museum of Naval Aviation, but it fell through and Coulson Flying Tankers is currently seeking a buyer for both aircraft as they are no longer being tasked with firefighting duties.

You can check out the stunning performance of the Martin Mars during AirVenture in our video: