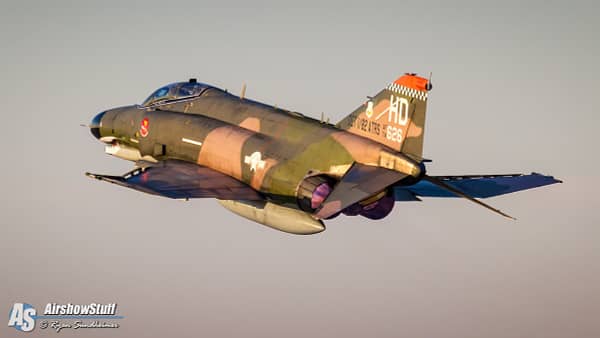 It goes without saying that the McDonnell-Douglas F-4 Phantom II has had an incredible impact on American aviation, one that carries it into modern aviation legend. One of the most iconic aircraft ever built, nearly everyone involved with aviation and the military has a story relating to the F-4. Unfortunately this American classic is rapidly approaching its final days*, at least in the US.

In April of 1996, the last operational US Air Force/Air National Guard F-4 flight was conducted, marking the end of the Phantom II’s active career. It continued to serve its country as a remotely-piloted target drone, but now even that mission is coming to an end. We met up with likely the last ever USAF F-4 pilot, Lieutenant Colonel Ron “Elvis” King of the 82nd Aerial Target Squadron, Detachment 1, while he was displaying one of the 21 remaining Phantoms at the Spirit of St. Louis Air Show & STEM Expo on May 14-15 2016. Lt. Col. King was kind enough to talk with AirshowStuff about the status of the target drone program, flying the F-4, and his job overseeing the final days of the famed Phantom.

The 82nd ATS uses the QF-4 drones for full-scale aerial targets that test surface and air-to-air missiles, radar technologies, and other counter-air systems. With 21 QF-4s left in the fleet, their numbers will be dwindled down to none by the end of this year. Once the program phases out the QF-4s for the incoming Boeing-modified QF-16 Fighting Falcons, any remaining Phantoms will be de-militarized and trucked out to the bombing range in New Mexico to be used as ground targets. When asked about whether any of the aircraft will be available to museums, Lt. Col. King wasn’t able to specify, but he did mention that the QF-4Es are not a very desirable aircraft to museum collections due to the modifications.

Lt. Col. King is hoping to get the QF-4s out and around to air shows this year while they’re still around, but with only eight available aircraft and four pilots, the 82nd ATS is stretched thin for availability to attend public shows. He is looking at taking the QF-4 to EAA AirVenture, the Reno Air Races, Nellis AFB’s Aviation Nation, and the Sioux Falls Air Show later this year. Testing requirements and availability will be the ultimate determining factors in their attendance.

*The Collings Foundation does own and operate one airworthy F-4 Phantom in the US. Additionally, several foreign countries use them in active service.

For more information, watch the interview above and keep your eyes posted here and on our Facebook page!