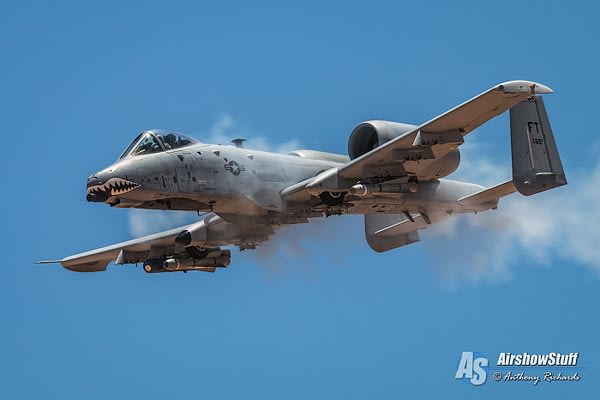 The US Air Force has decided to add live munitions to its single-ship demonstrations starting next year. The change was announced in a surprise press release today, distributed by Air Combat Command. Not all show sites will be eligible for the new demonstrations; the list will be finalized and released at this year’s ICAS convention.

“We’ve been wanting to share this with the public since our conference back in February,” said ACC Commander General Mike Holmes. “We’ve been planning this since [Secretary of Defense James] “Mad Dog” Mattis was sworn in. All credit needs to go to him. He was the one that brought up the idea and paved the way for us to bring something truly exciting to the air show circuit next year.”

The aircraft that will incorporate the live rounds are the A-10 Thunderbolt II, F-22 Raptor, and F-16 Fighting Falcon (Viper). The F-35 will not be participating for unspecified reasons. The A-10 will be restored to full demonstration status as part of the move; it currently is only permitted to perform in Heritage Flights. Each aircraft will conduct two strafing passes using their cannons and one bombing run with several bombs during their performances.

When asked about the new addition to show line-ups, Mattis said, “Our folks at home need to see we ain’t messin’ around. They need to harden up and get some. They need to hear the rumble of the guns and feel the motivation to drop and give our boys in blue fifty.”

The US Navy will not pursue live-fire passes until 2020, deciding instead to focus on the upcoming plan for the Blue Angels to transition to unmanned drones.

Until next year, here’s a dose of some BRRRRRRRrrrrrrt to tide you over!