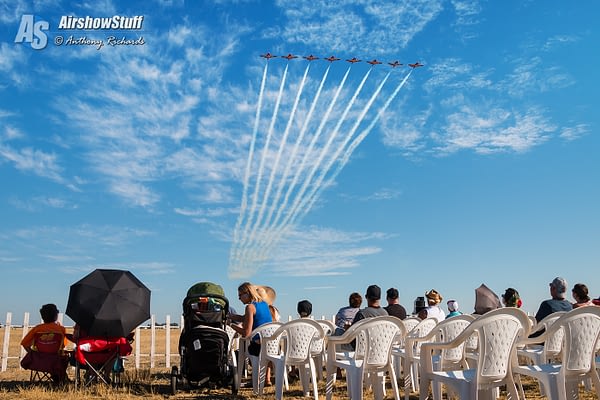 The biennial Lethbridge International Air Show returned in 2017 as a highlight worth catching in Southern Alberta and Western Canada. With a full list of performers of all types and a static display that was impressive to say the least, the July 15-16 weekend was well spent in Lethbridge.

Friday’s schedule started late to allow for a twilight show, something which is thankfully becoming more common. The show began with the United States Army Golden Knights jumping in at the start of golden hour. Shortly after they landed, the Canadian Forces Snowbirds took to the skies for yet another excellent performance, even with one ship missing. With light fading, the Canadian Air Force CC-177 Globemaster III powered down the runway and bolted into the sky. Geoff Latter in his Nanchang CJ-6 “Nancy” followed, then the United States Air Force’s A-10 Thunderbolt II “Warthog” mini-demo with some up-close and impressive pyro. Canada’s own Pete McLeod of Red Bull Air Racing fame tumbled through the sky just before Mark Peterson in his Dornier AlphaJet demonstrated how high-performance a non-afterburning jet can be. Greg “Wired” Colyer in his T-33 Shooting Star “Ace Maker II” kept it low and fast ahead of Jerry Conley in his beautiful de Havilland DH-115 Vampire “Vampy ‘Too’.” Just before the sun began to set, the Golden Knights fit in their full routine.

The highlight of the show was certainly the last demo, and one the crowds were waiting for: the CF-18 Hornet. The Hornet, with afterburners lighting up the runway, burnt a trail across the then night sky. Before finishing his routine, Bill Braack in the Smoke-N-Thunder Jetcar took to the runway and challenged the Hornet to a race, of which the outcome was undetermined by most spectators due to the enormous and impressive wall of fire that lit the grounds and sky as they crossed the finished line.

While the flying had finished and most were filing out of the show, a smaller, less-appreciated setting had been set on the static display. Folks on their way off of the airport were treated to the numerous aircraft on the static line lit up by large, portable lights, providing a unique and often unseen view as the last bit of light faded from the day into the dark.

This was the first and only day to show the full line-up of performers in the light of day. Attendance was noticeably high, despite the winds and approaching weather that persisted throughout the day. Nearly all performers were able to fit in their routines without issue. The Golden Knights were able to complete their first jump (which we were graciously allowed to observe from the aircraft), but unable to finish their second due to the winds. This prompted Transport Canada to monitor the approaching storm, and once it closed within 1 km, the show was postponed for a mandatory evacuation of the grounds. Shortly after, lightning struck the end of the runway. By then, the NOTAM set to secure the airspace for the performers was too near its end to continue the show, and the decision was made to cancel the remainder of the acts (CF-18 and Snowbirds).

With the same hours as the full show, but with select performances, the mini-show was intended to give first-time attendees a taste of what an air show is like. The winds were still high throughout the day, resulting in the Golden Knights cancelling their demo that afternoon. The acts that did still take the sky included the CC-177, T-33, AlphaJet, Vampire, A-10, CAF Snowbirds, CJ-6, and CF-18.

Certainly the aerial performers were worth the admission, but just as equally the static displays that attended proved worthwhile. All of the aircraft on the website’s listing of confirmed attendees showed up except the Transport Canada National Aerial Surveillance Dash 8. In a surprise filling of the Dash 8’s vacancy, a US Navy E-6B Mercury airborne command post and communications relay aircraft from Tinker AFB, Oklahoma came to the show. Additionally, a Royal Canadian Air Force CF-18 from 410 Tactical Fighter Operational Training Squadron, nicknamed the “Cougars,” with a special 75th anniversary painted tail joined the many heavies on the line. The show had a total of three C-17s on display, with one from Joint Base McGuire-Dix-Lakehurst, New Jersey, Altus AFB, Oklahoma, and a CC-177 from CFB Trenton, Ontario.

With a few hiccups throughout the weekend due to weather and other elements out of the show’s control, the 2017 Lethbridge International Air Show was able to impress with a stellar line-up of performers and a static display most shows would envy. We at AirshowStuff would like the thank the Lethbridge International Air Show Association and its volunteers for putting on this year’s show. We’d also like to thank Kim and Trina Tymko of Prime Rentals Ltd. for their sponsorship of the air show and help in coordinating our visit. We look forward to seeing you all again in 2019!