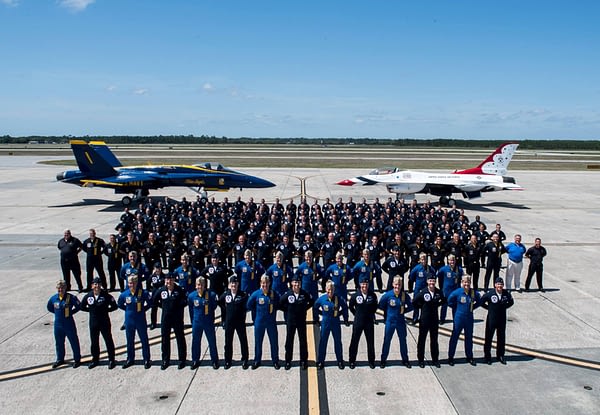 Jet team fans in Florida got a rare treat last week when the US Air Force Thunderbirds popped in for a visit with the US Navy Blue Angels and their home base in Pensacola. The two teams rarely cross paths during the airshow season, but do try to arrange some time together each year to learn from one another and pass on knowledge.

This year, the Thunderbirds took advantage of some convenient timing and stopped at NAS Pensacola between their shows at nearby Tyndall AFB and Lake Charles, LA. They received a warm welcome from their Navy counterparts, and during the three days together the team members swapped best practices and bonded through many different activities.

On Tuesday, each team performed a full routine over the base and two pilots from each team were able to ride with their counterparts. The Blue Angels are famous for not wearing G-suits, and you can rest assured that Thunderbirds #1 and #5 did not wear any during their ride either. Blue Angels #1 and #4, however, did accept the offered G-suits for their ride in the F-16 Fighting Falcon, since it can pull more Gs than the Hornet.

The maintenance and support crews got in on the fun as well, and the public affairs officers from each team ‘took over’ the other team’s Instagram account, and documented the visit with many video clips and photos. Among the coolest photos taken were several group shots of the combined teams. The joint training concluded with a double formation photo flight over the surrounding area, offering the Thunderbirds a chance the “buzz the beach”, the typical Blue Angel practice upon returning home from a show. The photo flight did have a hiccup when some turbulence caused two Blue Angel Hornets to make mid-air contact, but the highly trained pilots recovered quickly and ensured a safe outcome.

You can see more of the incredible photos and videos from this event in our forum thread: 2017 US Navy Blue Angels/USAF Thunderbirds Joint Training