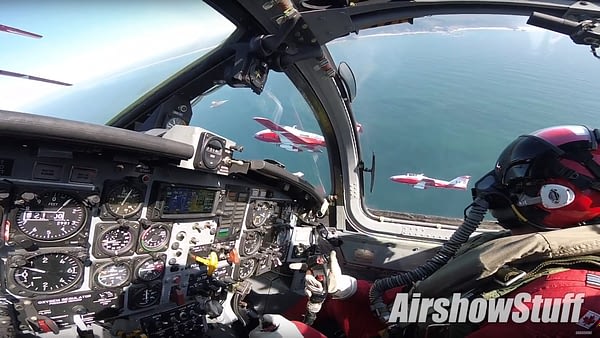 I have always been a fan of the Canadian Snowbirds. When I was just getting into airshows, their spectacular bursts were unlike anything I had seen before. As I became more familiar with the industry, their large formation rolls where they pull over the top while pointing right at the crowd stuck out as even more unique. And when I eventually earned my pilot’s certificate and spent some time at formation clinics, I found myself astonished by the difficulty of their many different nine-plane formations.

To this day, the Snowbirds are my absolute favorite airshow performance to watch, and one of the very few that I make sure to see at least once a year. One could say I feel a special connection to the team; they feature prominently in my most powerful airshow memories, and just hearing some of the songs they’ve flown to will bring goosebumps to my arms in an instant.

All of this is to say: when Snowbirds Public Affairs Officer Lt. Michèle Tremblay contacted AirshowStuff last month to talk about a media ride, it was more than just a cool opportunity. The catch was that I would have to get from Michigan to the Oregon International Airshow in Hillsboro, Oregon. Thankfully, the logistics were straight forward and less than two weeks later, I was descending past Mt. Hood on my way into Portland.

I actually beat the team to Hillsboro, and watched the #10 and #11 jets – the advance party – arrive in the Thursday afternoon sun. We got my quick medical check out of the way before the main group of nine jets arrived. The team’s support hauler, a specially-outfitted semi-trailer truck, was already in place. The truck brings all sorts of equipment for the team, including tools, spare parts, bicycles, a Gator four wheeler, and space for luggage that doesn’t fit into the relatively small CT-114 Tutor aircraft.

I knew that the team had performed on the East Coast (Virginia Beach, VA) the weekend before, and we heard how the Canadian Army driver had driven the truck all the way from there to the team’s home base in Moose Jaw, Saskatchewan for a short three hour stop to reload before finishing the cross country journey. I was thankful for my airline ticket just thinking about it.

The rest of the team arrived with a nine ship flyby, and after a quick debriefing I was told to report the next morning for ejection seat training(!) and other preparations.

Once we were all set, we went straight to the briefing room to meet the rest of the team and go over the details of the flight. As a dedicated media opportunity, the team was forgoing their typical Friday practice and instead planned a transit flight just for us. We would take off and head north, then turn west and follow the Columbia River to the Pacific Ocean near Astoria, OR. After a flyby there, we would turn south and fly along the coast before turning inland and returning to Hillsboro. Upon arriving back at the airfield the team would perform a site survey to familiarize themselves with the showline and then land.

Unfortunately, the FAA rep at the show incorrectly but adamantly stated that aerobatics could not be performed with passengers. The team grumbled but accepted it. The rest of the briefing covered the weather (clear skies, unlimited visibility), air traffic control, divert airports, and other such details that well-prepared pilots pay attention to. I would be flying with Snowbird #4, Maj. Stephen “Pup” Melanson in the First Line Astern position, right behind the “Boss”.

Outside, we were introduced to the aircraft technicians who would be helping us strap in. Cameras were readied, and soon it was time to mount up. All of our prepared gear was waiting for us, and my awesome (and again, patient) tech Cpl. Brandon Harvey made sure to catch all of the steps I missed. In my defense, when you’re covered in straps and handles that turn on oxygen or deploy a parachute, you tend to double check what you’re pulling!

Pup joined me in the small side-by-side cockpit, and talked me through the startup procedure once all of the pilots had checked in. The jets lined up on the runway in three groups of three, with #6 and #7 on our wings as the middle group. Pup explained the sequence as we rolled down the runway together and all nine aircraft worked to form up on our northbound leg.

The scenery was breathtaking. In the clear afternoon air, we could easily see Mt. Hood, Mt. St. Helens, Mt. Adams, and even Mt. Rainier in the distance while haze filled the valleys below us. The team went through a couple of formation changes as Pup explained the spacing and alignments. Although we didn’t really move around ourselves, the #4 position gave me a great view of the other aircraft moving around on both sides of us. The changes were far more sudden and crisp than other formation flights I’ve been on, but at the same time controlled and smooth. I wouldn’t expect any different from some of the world’s best!

With smoke on, we gave a big sweeping flyover to the citizens of Longview, WA as we turned west. Each aircraft dropped into trail as we descended toward the river, which for the Snowbirds means a follow-the-leader line of nine jets, each with the freedom to maneuver as needed. Pup, knowing I fly, handed me the controls and let me slalom behind the pack ahead of us as we wound down the river. The controls were responsive but not touchy. I felt right at home and I can understand why the aging jet is still perfect for formation displays. The coolest part of the entire flight was when I pulled us into a turn and blasted right through the smoke trail of #3, bobbling slightly as we crossed his wake.

Sadly, my part only lasted a few minutes before we were called to rejoin – a maneuver that included a few violent whips and the hardest G of the flight, probably around 4 or 5. That was the tame version, Pup explained to me; the rejoins during the scripted show are even quicker and tighter.

Back in formation, we did two flybys over Astoria, including a low pass down the runway there before proceeding south along the coast. This was another dose of beautiful scenery, with big bluffs and rocky islands as far down the shoreline as the eye could see. Boss put us into a big 360 degree turn right over Tillamook Rock so that the pilots on each side of the formation could take in the view while also staring at his jet.

We continued a little further south, with a couple more formation changes thrown in. The ocean fell behind us as we climbed up over the hills of the Tillamook State Forest – a bad place to eject, Pup pointed out to me. The team dropped back into trail, and descended into Hillsboro as a line of white dots against the evergreens. The site survey was a quick four passes over the airport, then Pup whipped us back into formation again for a final Big Diamond flyby. The team separated into three groups of three again, and set down smoothly on the runway. Our techs marshaled us into position, perfectly spaced and lined up. My Snowbirds flight had come to an end.

I’m forever grateful to the team for the opportunity to join them and I give special thanks again to Lt. Michèle Tremblay, Maj. Stephen Melanson, and Cpl. Brandon Harvey for their help. If you missed it above, make sure you check out the video of my Snowbird flight!

The Snowbirds have wrapped up their 2018 season, but I highly encourage you to make plans for one of their shows once the 2019 schedule is released in early December. You will be able to find that right here on the AirshowStuff blog, or in our forums.