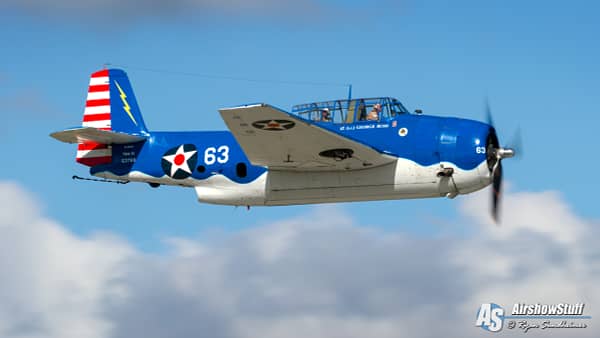 When former President George H. W. Bush is buried this week, the US Navy Blue Angels will be with him. On his socks.

The 41st President was well known for his love of colorful socks, often using them to make a statement or support a cause. Bush’s spokesman Jim McGrath shared this image on Twitter of the final pair of socks, which feature the iconic Blue Angel delta formation, with smoke on, against a blue sky. Also featured are the Wings of Gold that signify a naval aviator.

The 41st President will be carried to his final rest wearing socks that pay tribute to his lifetime of service, starting as an 18 year-old naval aviator in war. That legacy is now being carried, in part, by the brave, selfless men and women aboard @CVN77_GHWB. #Remembering41 pic.twitter.com/OabtK756fO

It’s entirely fitting that Bush will represent the Navy in his grave. After all, he flew 58 combat missions in TBM Avenger torpedo bombers for the US Navy in World War II. He was shot down during an attack mission in 1944 and rescued by a submarine. The final Nimitz-class aircraft carrier to enter Navy service, CVN-77, is named for him.

Today @GeorgeHWBush was made an honorary #BlueAngel. Welcome to the team Mr. President! #USNavy pic.twitter.com/9Dijsm4kKS

Aviation continued to play a part in Bush’s life until the very end. The code-word used by family and friends to privately share news of his death was “CAVU”, an aviation acronym for ‘ceiling and visibility unlimited’ that signifies weather that presents no restrictions on flying.

Bush’s legacy as a naval aviator will live on; at least two civilian-owned TBM Avengers bear his name as part of their paint schemes.