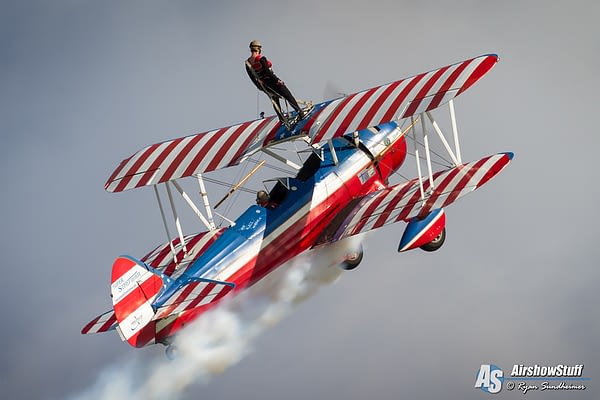 The 2018 recipient of the Bill Barber Award for Showmanship is Greg Shelton, someone known across the airshow industry for his various acts and performances.

Shelton, who began performing in airshows in 1990, had an interest in aviation from an early age. In 1982, Greg began flying lessons in a J-3 Cub, but traded in the Cub for a Starduster Too so he could persue aerobatics. That decision certainly paid off!

Today, Greg is well known for his 450 Super Stearman act and FM-2 Wildcat aerobatic performances. In 2017, Greg and his wife/wing walker Ashley Shelton added a nighttime wing walking act to their plethora of performances, once again bringing creativity to the world of airshows. Greg’s 2018 show season includes 12 airshows in both the Super Stearman and Wildcat.

Presented annually by World Airshow News and friends and family of the late Bill Barber, airshow performer extraordinaire, the award recognizes an airshow entertainer who has demonstrated superb showmanship ability. Past recipients compose the selection committee.

The award will be formally presented in a special evening ceremony on Tuesday, July 24th at Theater in the Woods at EAA AirVenture in Oshkosh, WI.