Home » Jet Teams » Did You Notice The Burning Piano In Captain Marvel? Here’s The Special Meaning Behind It – And Its Connection To A Real Life Hero 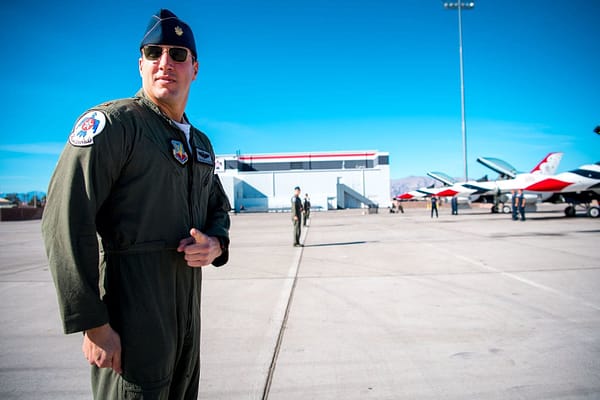 Millions of people will be heading to theaters to see Marvel’s new Captain Marvel movie over the next few weeks, but most won’t understand one special image in the movie. Near the beginning of the film, a quick flash of a burning piano is shown on the screen. Marvel movies are known for their detailed backstories and easter eggs, but what’s the deal with the piano, and why are we writing about it on an airshow website?

Tragically, Del Bagno was killed in a crash in April of 2018, just a week after concluding his work on the film. The team was practicing their airshow routine at Creech AFB near Las Vegas when his jet impacted the ground after failing to recover from a high speed dive.

So why the burning piano? It’s actually a traditional send off for fighter pilots who have “flown west” that, according to fighter pilot lore, dates back to World War II or even earlier. There are variations on the story, but perhaps the most common tale is that a particular RAF pilot was especially good at playing the piano in the squadron clubhouse. When he was killed in battle, his squadron mates realized they would never hear him play again and burned the piano as tribute. It’s not only an appropriate shot to include, it fits perfectly with the lead character’s background; Brie Larson plays Carol Danvers, an Air Force fighter pilot who would know the tradition well.

There are other tributes to Cajun in the film as well. He is mentioned several times in the credit roll, and the filmmakers reportedly snuck his callsign into the background of several scenes. He even has a brief cameo, playing a game of pool with Danvers in a quick flashback. It’s a wonderful gesture to honor him.

Cajun’s legacy lives on through the Cajun’s Aviation Dream charity, which seeks to help “stellar young Americans chase their own dreams to fly and pursue their passion for aviation” through scholarships and other efforts. You can visit their website to donate to the cause, apply for one of the scholarships, or view photos of Cajun and the many tributes to him, including the real life piano burning.

For their part, the USAF and Thunderbirds have tried hard to capitalize on the movie’s portrayal of an Air Force fighter pilot. The Air Force organized a major PR campaign around would-be F-16 demonstration pilot Capt. Zoe “SiS” Kotnick, calling her the “real life Captain Marvel” until she was suddenly dismissed from the team. The Thunderbirds visited Los Angeles last week to perform a flyover of the movie’s premiere and other area landmarks, including the home of Cajun’s parents.

Did you catch any of the hidden tributes to Cajun in the movie? Let us know in the comments below or in our forums!