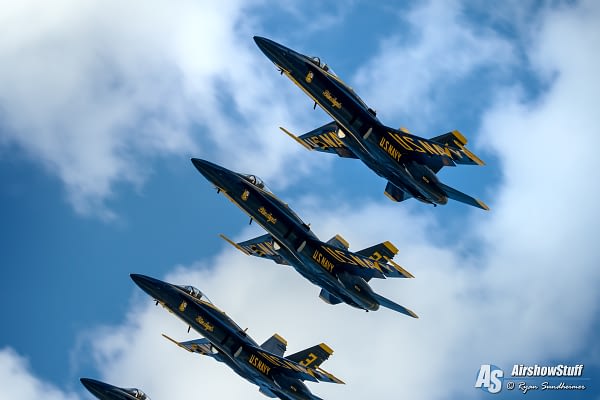 We now know a lot more about the US Navy Blue Angels‘ coming transition to the F/A-18E Super Hornet thanks to former Blue Angel #1 Captain Ryan Bernacchi. He spoke to Newsradio 1620 in the team’s hometown of Pensacola, FL recently, and explained not only the difference between the team’s current F/A-18 “Legacy” Hornets and the coming Super Hornets, but also the current status of the transition.

Bernacchi started by explaining why the transition is going forward in the first place. When the Blues began flying Hornets in the late ’80s, significant engineering work was done to modify the jet for airshows. This work applied to the A and B model Hornets. More recently, similar work was done to prepare some older C and D model Hornets for shows as well. These modifications include things like the smoke system and the ability to fly inverted for longer than a stock jet. Although the team has continued to fly these older jets, they are aging and relatively few usable airframes remain eligible for the already approved modifications. In response, the Blues were forced to look at either pursuing younger Legacy Hornets or transitioning to Super Hornets.

Their findings are very interesting. Bernacchi says that even though the Legacy Hornets are now retired from active Navy service – the final operational flight was February 1st – the vast majority of the youngest airframes are earmarked for service with the Marine Corps and Navy Reserves. A middle group of airframes from production lots 13 and 14 were available to the team, but had enough differences from the team’s current aircraft that they required a similar engineering effort for airshow modifications. Surprisingly, the end conclusion was that it would cost roughly the same amount to transition to anything newer than the team’s existing jets, whether moving to newer Legacy Hornets or Super Hornets! The final decision to go to Super Hornets was made this past December.

Here’s a video showing Legacy Hornets and Super Hornets flying side by side:

So when can we look forward to new jets in the distinctive blue and gold paint scheme? Bernacchi says that the current plan is to have 11 modified Super Hornets – early production models that never saw operational service – ready for winter training at the end of 2020. They would debut in the spring of 2021. This matches the preliminary 2020 airshow schedule released by the Blues, which is notable for ending a month earlier than usual. We speculated that this was to allow extra time for the off-season transition, and that appears to be the case.

Bernacchi is also quick to point out that this project will take a backseat to maintaining and upgrading the frontline force, so it may slip due to potential budget cuts or other difficulties. The team can continue performing in their current jets for some time if it does get pushed back, but he was careful to emphasize that the new jets are not combat-ready models and they are not coming from any combat units.

What will the show look like after the transition? Bernacchi and former Blue Angel solo pilot Cdr. Frank “Walleye” Weisser spent time at NAS Patuxent River in Maryland analyzing the aircraft’s capabilities and fit for the team. His verdict after flying maneuvers in a simulator and in real life is that it will work well for the team, but it will require some adjustments. One maneuver – which Bernacchi did not name – is likely to be modified or dropped, but he feels some others will look better than they do now.

One proposal is for the diamond and solos to each drop one maneuver in order to streamline the show and improve the flow during the routine. This would shorten the show slightly, but even just three minutes per flight spread over ten performances (including practices) a week adds up to dozens of hours of airframe time saved each year. Bernacchi says that in addition to vetting the aircraft systems for potential failures, they spent a great deal of time looking into other factors of aircraft fatigue like how certain maneuvers and rejoins are flown. Although he did not go into specifics, he said they came up with a plan to substantially reduce the fatigue impact on the airframes, which will extend their lives with the team.

What do you think the mystery maneuver is? Feel free to take a guess and add your thoughts on the transition in our forums! Also make sure to visit our airshow calendar to see where you can watch a Blue Angels performance in 2019 and 2020.