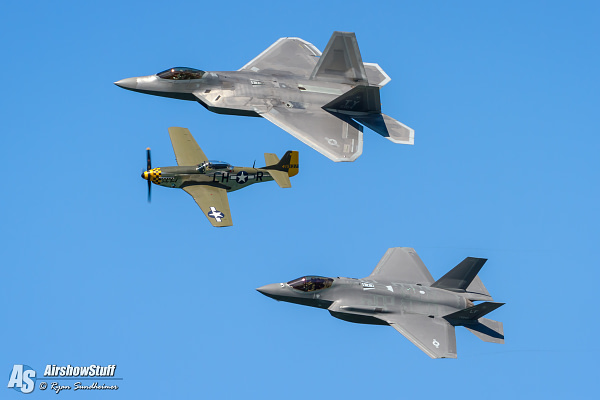 An easy to overlook update from Air Combat Command has yielded some exciting developments with the Air Force’s single-ship demonstration and Heritage Flight programs!

The update in question is the publishing of the 2019 version of the Demo Team Support Manual; a long document which spells out all of the requirements that airshows must meet in order to host the F-22 Raptor, F-35 Lightning II, F-16 Fighting Falcon, and A-10 Thunderbolt II demonstration teams during the season. These details are often mundane and invisible to spectators, like the number of required rental cars and mandated access to a 24/7 fitness center, but the manual does give a glimpse at the many factors that need to be carefully considered when planning an event. The 2019 version includes a couple of noteworthy mentions that will be very noticeable to spectators.

First, the Heritage Flight program is being expanded to include a Northrop F-5 fighter jet! The F-5 is an interesting addition because it was primarily exported to US allies and saw only limited USAF service. It will represent the Vietnam War era previously represented by USAF-operated F-4 Phantom IIs, which did not return to the Heritage Flight program after the 2013 sequestration year shut down all military demonstrations and left active service in 2016. This left the A-1 Skyraider as the only approved participant from that time period. F-5s did fly a couple thousand sorties in Vietnam, but certainly are not closely associated with the war.

The pilots in the program meet at Davis-Monthan AFB in Tucson, AZ every year for the Heritage Flight Conference, a weekend practice session to prepare for the upcoming airshow season. Civilian participation in the Heritage Flight is kept under tight control, and only a small group of specially approved pilots are allowed to fly in them, and only in certain aircraft types. Aside from the F-5, only P-51 Mustangs, P-38 Lightnings, P-40 Warhawks, P-47 Thunderbolts, F-86 Sabres, and A-1 Skyraiders are approved. There are several other privately owned fighter jets that could theoretically be included; an F-4 Phantom II flown by the Collings Foundation and a pair of F-100 Super Sabres are the most notable. Sadly, it seems likely that logistics and costs will prevent them from participating any time soon.

An interesting note is that while the F-5 is increasingly flown as a civilian warbird in the US, the US Navy and Marine Corps still actively use versions of the aircraft as aggressors during training and the T-38 Talon advanced trainer that was developed from the F-5 is a mainstay of the Air Force training fleet.

The other interesting takeaway from the support manual update is that pyrotechnics have been approved for use during the F-22 and F-35 demonstrations. The pyro is limited to a wall of fire on the high speed pass only, similar to the limitations already approved for the F-16 demo. The A-10 demo continues to be approved for additional pyro as it includes simulated strafing and bombing attacks in its routine. Most shows do not elect to use pyro with the demos, but it’s great that it will be more available in the future for those that do.

Find out where you can see the USAF single-ship demonstration teams in 2019 by visiting our airshow and aviation event calendar, and share your thoughts about the new F-5 on our forums!