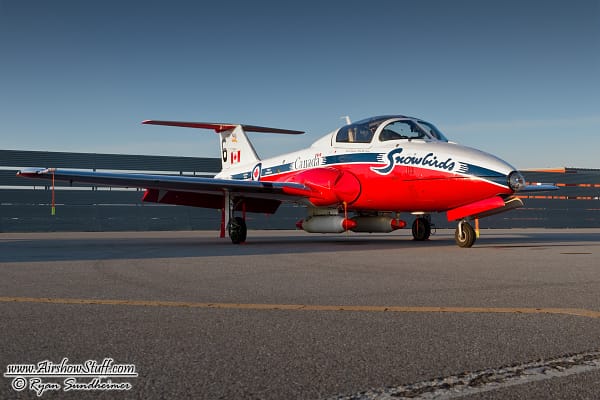 Less than 24 hours after the Canadian Snowbirds’ plans for Operation Inspiration flyovers in British Columbia came to a tragic halt, general aviation pilots in Canada are stepping up to carry the mission home and honor the team. Operation Inspiration was the name for a series of flyovers conducted by the team across Canada, starting… Read more

Captain Jenn Casey was killed Sunday when the Canadian Snowbirds jet she was riding in experienced trouble and crashed shortly after takeoff from Kamloops, British Columbia. The pilot of the jet, Snowbird #11 Captain Richard MacDougall, survived the crash but sustained serious, but non-life-threatening injuries. He remains in the hospital. Captain Casey has been the… Read more

Update: The team members involved in the crash have been officially identified. Original Post: The Canadian Forces Snowbirds have confirmed that one team member has died and another is seriously injured following a crash in Kamloops, British Columbia earlier today. As we reported earlier, the aircraft was one of two jets that took off from… Read more

UPDATE: The Snowbirds have confirmed that one member of the team died in the crash. Another is in the hospital with serious but non-life-threatening injuries. ORIGINAL POST: One of the Canadian Forces Snowbirds has crashed near Kamloops, British Columbia this afternoon. At least one person aboard – there may have been two – was able… Read more

As our 14th year of airshow coverage comes to a close, we’re taking a look back at another awesome season of aviation and airshows! These are our 12 favorite videos from 2019: Red Arrows in the USA! The RAF Red Arrows made a very rare trip across the Atlantic to perform in the US and… Read more

Jet Team schedules won’t be released until next week, but the Canadian Forces Snowbirds have already confirmed that their 2020 show season will not start until June 6th. The team is over a month behind their planned training schedule following an October crash at the Atlanta Air Show in Georgia. Pilot Capt. Kevin Domon-Grenier, Snowbird… Read more

Photo by Brandon Wynn/Hover-Slam Photography A pilot with the Canadian Forces Snowbirds team was forced to eject from his aircraft before it crashed earlier today. Capt. Kevin Domon-Grenier, Snowbird #5, is reportedly doing fine after parachuting to safety. The CT-114 Tutor aircraft impacted a field, leaving no injuries or damage on the ground. Photo courtesy… Read more

As our 13th year of airshow coverage comes to a close, we’re taking a look back at another awesome season of aviation and airshows! Our onboard videos have long been highlights, as they take viewers to all sorts of special places. Whether on the wing of a small aerobatic aircraft, or in the cockpit of… Read more

I have always been a fan of the Canadian Snowbirds. When I was just getting into airshows, their spectacular bursts were unlike anything I had seen before. As I became more familiar with the industry, their large formation rolls where they pull over the top while pointing right at the crowd stuck out as even… Read more

Phantom’s-Eye View! It’s no secret that the F-4 Phantom is a favorite of airshow fans everywhere, but with 2016 being the final year for the venerable Phantom in the US military inventory, the opportunity to see one flying is now even more rare. Once it returns from maintenance, the Collings Foundation F-4 will be the… Read more