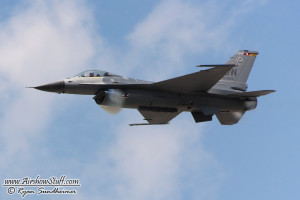 Since sequestration took place, many airshow fans have been eagerly waiting at the end of each year to hear if some of the USAF’s single ship demos will return for next years airshow season. Yesterday, we got our answer for 2015!

ACC Aerial Events posted on their Facebook page that the single ship demo teams F-16 East, based at Shaw AFB in Sumter, SC and the F-22 Raptor Demo Team, based at Langley AFB in Hampton, VA will be performing demos in 2015. Heritage Flights will also be performed, combining the latest in USAF technology with warbirds of the past in a salute to airmen everywhere.

The exact number of shows and locations for both the F-16 and F-22 have yet to be determined, but fans should be on the lookout for a schedule in mid-February. Of course, we’ll post the schedule when it is released here on the Airshowstuff Blog!

Are you excited to have the F-16 Demo Team back in 2015? Let us know on our Facebook page! This week is Vapor Week on our page, so if you have any old picture of the F-22 or F-16 Demos pulling some vapes, we’d love to see them!