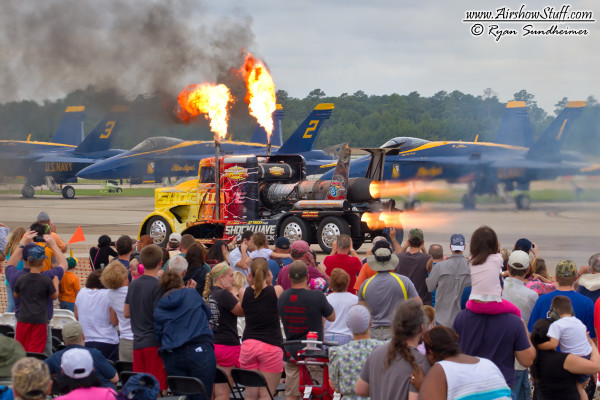 1) Hornets Everywhere
NAS Oceana is synonymous with F-18 Hornets. As the master jet base for the East coast, Oceana is home to 18 Hornet squadrons and over 200 F-18s. Both the F/A-18C Hornet and F/A-18F Super Hornet demonstration teams are part of VFA-106, the main training squadron at the base. In previous years, all of this would guarantee lots of jet noise at the airshow, including a performance by both demonstration teams as well as a unique “fleet airpower demonstration” performed by some of the operational units on base. In the current budget climate though, nothing is guaranteed. The entire airshow was called off last year, and the Hornet demo teams were not able to perform at any shows this year. Everyone wondered what the 2014 airshow would look like without any Hornet participation (aside from the Blue Angels). But then, as we reported, activity around the base seemed to indicate a return of the Hornet demos. As the show neared, this theory was confirmed and it was announced that both demo teams would perform, and that a smaller-scale fleet airpower demo would also take place. 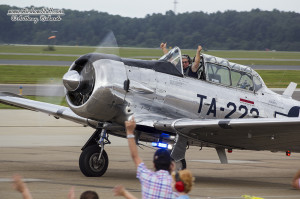 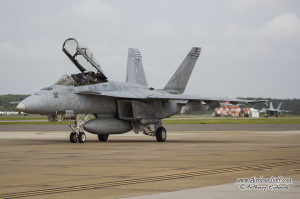 Sure enough, spectators at the airshow heard the roar of a Hornet many times during the weekend. The F/A-18C performed early in the show, followed a little bit later by the airpower demo. Although the six-Hornet airpower lineup was significantly smaller than previous years, which saw 12 or more aircraft of many types performing, everyone was happy just to have one. Unfortunately the airpower demo was decidedly hampered by the bad weather, and the VFC-12 aggressor Hornet was unable to perform its intended vertical dogfight sequence. Still, several VFA-32 Super Hornets put on a unique show including simulated bombing and strafing runs, a short simulated dogfight, “buddy” air to air refueling, and a formation flyby with a sneak pass. 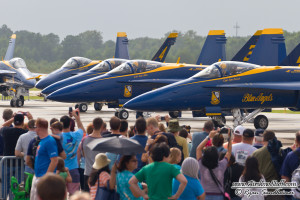 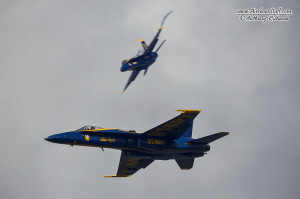 2) Special Color Schemes
Hornets not only dominated the skies over NAS Oceana, they dominated the static display ramp as well. As the home base for so many squadrons, Oceana has many special “CAG” paint schemes. One running complaint from previous airshows is that the units never put any effort into displaying these special and colorful schemes. This year the show finally listened to the fans and no fewer than 10 specially painted Hornets were placed on the static ramp in a large triangle formation. It was certainly an imposing sight and one that is not seen anywhere else. Fingers crossed that this is done for every future show as well! 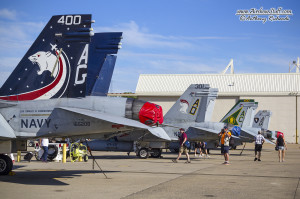 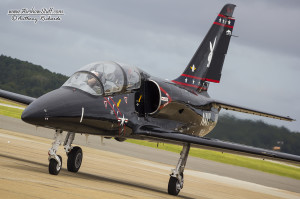 3) Shockwave, Front and Center
The Shockwave jet truck and other jet-powered ground vehicles are always crowd favorites, but NAS Oceana offered a particularly good chance to get up close to this flame throwing beast. The fence line at the show is located on the ramp so as to allow room to taxi directly in front of the crowd. The performers use this to parade down the line after their flights, but Shockwave took full advantage and started up right in fron of the crowd. Instead of doing the usual flamethrowing and afterburner pops on the runway, Shockwave driver Chris Darnell did them just feet from the front row and left no doubt about how Shockwave got its name.

4) Blue Angels Knock It Off
After an absolutely perfect Friday, the weather on Saturday and Sunday was less than ideal. Both saw mostly low clouds and a bit of rain, though by Sunday afternoon the weather cleared for a Blue Angels high show. Saturday was not so fortunate; the Blues were unable to complete even a full flat show before landing. Just a few passes into the demo, an isolated rain shower moved in over the field. The team kept flying as some in the crowd headed for cover. About a third of the way through the demo, the team called a knock it off due to the lack of visibility. It was almost comical to listen to the radio as they diamond and solos tried to make contact. One of the solos had been over the nearby oceana turning around between maneuvers before losing sight of the field, and he was basically trapped in a pocket of better weather. The diamond and other solo had found a hole in the rain on the other side of the base, and only as the rain moved out were they able to join for a break to land. The many fans who had stuck out the wet weather to watch the team were rightfully crushed. Of course, as the jets taxied to parking the sun broke out and the visibility lifted. 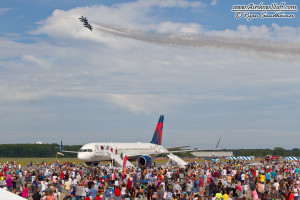 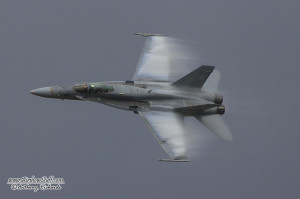 5) Beach Blast
One of the unique aspects of the NAS Oceana airshow is the Saturday night Beach Blast. This is an event designed to bring the airshow to the city’s crown-jewel beachfront for a short period. Unlike the traditional on-base Friday night airshow, the Beach Blast was included in this years festivites. As the sun set, the Blue Angels were introduced on the stage in a city park along the beach. Soon after, a Super Hornet from the base flew by with afterburners fully engaged. In the dim evening light they glowed like a torch – an awesome sight to behold. This year the crowd was treated to several max-afterburner passes before several jumpers from nearby Skydive Suffolk decended to the park under canopy. What a night on the beach!