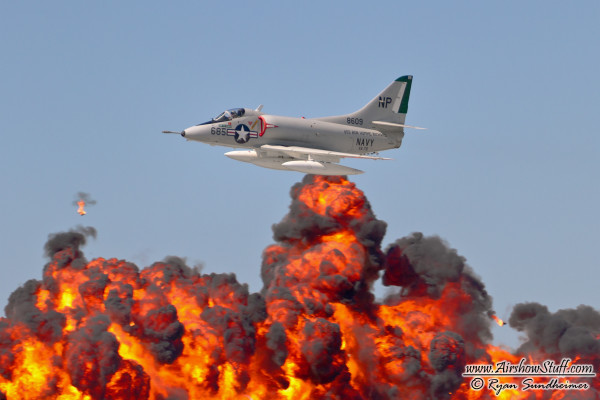 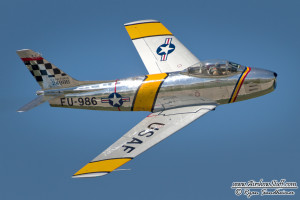 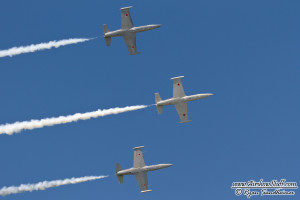 Small Show Atmosphere
While airshows with jet teams and major gatherings get a lot of press, small shows are almost an entirely separate world. The layout is more intimate, the people are generally friendlier, and the gate rules are often relaxed. There is not an ‘ego’ to the event. Wings Over Waukegan is one of these small shows, and it provides a wonderful change of pace from larger blockbuster events. The entire show layout is smaller, and there are no chalet tents. The only tent, set up for performers and other VIPs, is at one end of the show line. The performer aircraft were parked directly in front of the main crowd area with just enough room to taxi out. Before the show, this section of the ramp was open to the public to get up close with the performing aircraft and pilots, something rarely seen at large shows. 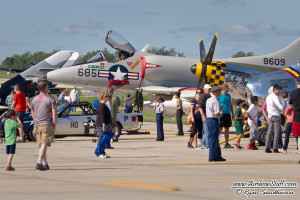 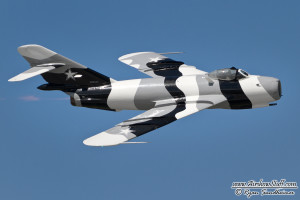 One Day Only
In fitting with the small show atmosphere, the event is only held for one day. This is not unheard of with smaller shows, but it certainly feels different to know that you cannot come back and see the same thing the next day. Photos must be taken with cautious settings as there is no second opportunity. This also makes the show organization much more vulnerable to bad weather since the crowd cannot alter their plans if rain or storms are forecast. Last year’s show dealt with large storms throughout the afternoon, but thankfully was successful enough to continue this year. However, the single day schedule is nice because it affords a chance to relax afterward without fear of an early morning to come. 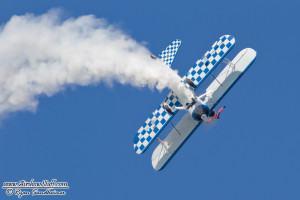 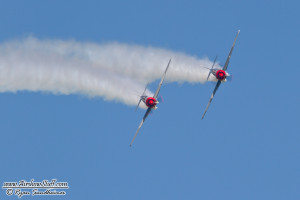 Smoke-out
Luckily for the show the weather this year was very nearly perfect. Cloudless blue skies helped the photographers use the show’s sun-at-your-back orientation to its full potential and temperatures in the low 70s kept everyone comfortable. The one factor that wasn’t favorable was the decently strong on-crowd wind, and it led to some interesting moments during the show. Only a few performers used smoke during their routine, but those that did quickly smothered the crowd with it. During the jet warbird segment it got so bad that the aircraft could not be seen until they were past. A T-33 making a high speed pass and suddenly appearing in front of you is a pretty cool sight!

Warbirds Front and Center
The core of the Wings Over Waukegan show is undoubtedly the warbirds. The Warbird Heritage Foundation, a major player in Midwest shows, is based on the field across from the crowd area and puts most of their aircraft on display each year. The WHF A-4 Skyhawk served as the show finale this year, but their P-51 Mustang, T-2 Buckeye, A-1 Skyraider, F-86 Sabre, and L-39 Albatros also either flew or sat on static display. Other warbirds came in for the show, including a T-37 Tweet that put on an impressively nimble aerobatic demo, and an F4U Corsair that performed aerobatics and a US Navy Legacy Flight with the A-4. 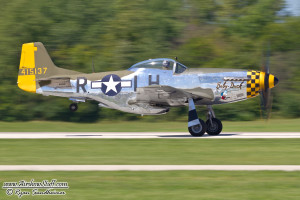 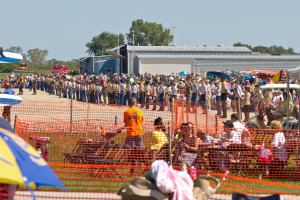 An Army of Cadets
One of the most stunning aspects of the Waukegan show was the massive number of cadets present. Be they Civil Air Patrol, Young Marines, or other groups with a similar purpose, the cadets and their handlers almost outnumbered the actual spectators at the show. Every static aircraft had a minimum of 3 to 5 cadets stationed around it on guard duty, making photos difficult or impossible to come by. Once the hot ramp closed, a line of cadets marched out to form a human wall in front of the spectators rather than simply setting up some sort of fence. Luckily some areas of the crowd line had normal snow fencing, but anyone with the misfortune of sitting behind the cadets surely had to feel angry at seeing a bunch of uniformed butts where aircraft should have been. Hopefully the show can look at this and come up with an alternate method of creating a crowd line. Dragging some stands out and running rope between them would not be difficult. On a positive note, the cadets were relatively relaxed and the power trips that have become all too familiar to airshow fans were not a problem. And when the only complaint about the show is a bunch of well behaved cadets, you know there isn’t much to complain about at all!