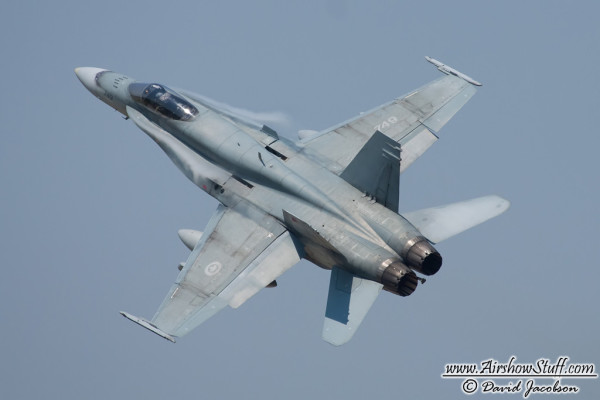 In a press release last Friday, the Royal Canadian Air Force announced that Captain Denis “Cheech” Beaulieu will be the CF-18 Demonstration pilot for the 2015 season. A native of Sherbrooke, Quebec, Capt. Beaulieu joined the Canadian Armed Forces in 2006 with the goal of becoming a fighter pilot. In 2011, he completed CF-18 training and was assigned to the 425th Tactical Fighter Squadron in Bagotville, Quebec. Capt Beaulieu has participated in multiple training missions and exercises across Canada, the USA, and South America during his time in the RCAF. With over 1,100 flying hours in high performance aircraft and 780 hours in the CF-18 Hornet, Capt. Beaulieu is certainly well qualified to represent the RCAF across North America!

In a statement, Capt. Beaulieu said that he is “really looking forward to taking the CF-18 all over Canada and the United States. This job gives me the opportunity to celebrate aviation with audiences all over, while flying the Hornet in a way that few pilots get to fly. Best of all, I get to do this all with a team of highly talented professionals who work together to put on a great show.”

2015 also marks the 75th anniversary of the Battle of Britain, and the CF-18 Hornet Demo Team will commemorate this moment with a special paint scheme. The paint scheme was designed by veteran Design Director Jim Beliveau of the 4th Wing Cold Lake, Alberta. The jet paint scheme will be revealed in early 2015.

Training for the 2015 airshow season begins in late April at Comox, BC, prior to this years airshow season. Check out where “Cheech” will be flying with the CF-18 Hornet Demo 2015 schedule.