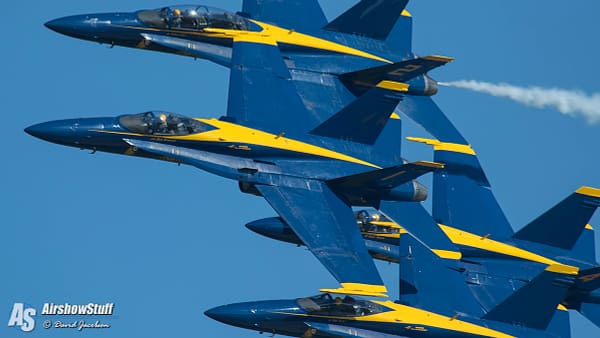 Oshkosh always has an award winning lineup and many highlights through the week. This year – the show was home to another first.

For the first time ever, the United States Navy Blue Angels flew a full demonstration in the skies over Oshkosh.

The team arrived Wednesday afternoon during the afternoon airshow, announcing their presence with a perfectly-timed (of course) flyby at the end of the national anthem. Only five jets arrived initially, with #3 arriving several hours later and #7 coming in separately after that.

On Thursday, the diamond pilots performed their circle and arrival maneuvers, where they pick out landmarks to use as they fly. They were supposed to do this during the daily airshow, but the aircraft had a small mishap while taxiing out in the interest of safety they canceled. They were able to reschedule for 8pm, after the airport is normally closed. Two jets took off and completed the necessary maneuvers just in time. Fans who stayed noted the rare chance to see the Blues jets with afterburner glow and lights on. The solo pilots performed their circle and arrival flight on Friday morning.

Noticeably absent from the show was the Blue Angels’ famous blue and gold C-130 Hercules, Fat Albert. In the wake of the crash of a USMC C-130T that killed 16 servicemembers, the USMC ordered a safety stand down of all C-130Ts, including Fat Albert. Bert was not only unable to perform, she never even made it to Oshkosh. Instead, the team relied on a Navy C-40 Clipper, the military version of the Boeing 737-700C, to bring in their maintenance crew and some equipment.

The Blue Angels also participated in a popular Theater in the Woods event on Friday, July 28th. During this appearance, they spoke about being on the team and took questions from the audience. A couple of the questions were particularly interesting; when asked about female Blue Angel pilots in the future, Blue Angel #1 revealed that there have been no female F/A-18 applicants for the past two recruitment cycles. The team has never had a female fly as a Hornet demonstration pilot.

The transition to the Super Hornet was also discussed. Currently, the team is in their 30th year of flying the Boeing F/A-18 Legacy Hornet. Despite internet rumors of a switch to the Super Hornet in September of this year or at the beginning of the 2018 season, the team plans to continue flying their Hornets for now. In fact, they are currently inducting three “new” Hornets into the squadron.

The target date for transitioning to the Super Hornet is not until 2019, and it was quickly pointed out that it could slip beyond that. There are several Super Hornets already set aside for the team, but they will need to be modified and tested before the pilots can begin training. One step in the right direction was mentioned; apparently a couple (now previous) Blue Angel pilots have already flown the current flight demonstration profile in the Super Hornet simulator and the results seemed positive. Hang in there Rhino fans!

Didn’t get a chance to see the Blue Angels at Oshkosh in person? No worries! We’ve got you covered with a video of their entire Friday performance!