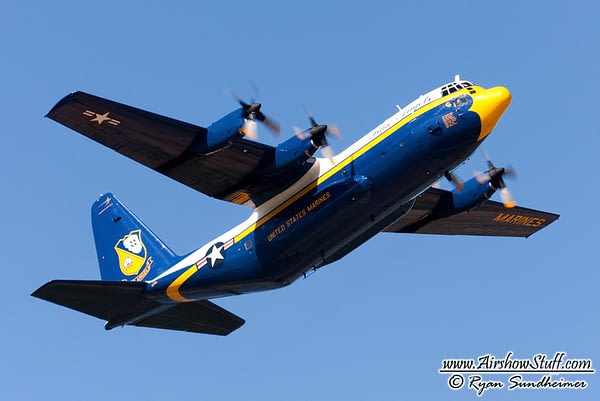 In a statement to NewsRadio 1620 in Pensacola, Naval Air Systems Command, commonly known as NavAir, confirmed that they are looking to the Royal Air Force for a replacement for a new Fat Albert.

The new report sheds a little more light on the situation after the original news that the RAF was listed in a contract to replace the current Fat Albert.

The biggest take away from the new post is that acquisition of a C-130J from the Royal Air Force would serve as a permanent replacement for the Blue Angels. The aircraft’s primary role is to transport the team’s equipment, and there is no confirmation yet whether the new C-130J will perform at airshows or not.

“High operational tempo and current in demand nature of Navy assets” was listed as the reason for the Navy looking to the Royal Air Force for a replacement instead of just taking one from the fleet. In addition, the current Fat Albert air frame is “nearing its structural end of life and the United Kingdom MOD C-130J presents an economical solution for its replacement.”

The Royal Air Force currently has a surplus of C-130J models in storage, making them an ideal source of a new Blue Angel support aircraft.

Fat Albert and the rest of the C-130T fleet has been grounded since last summer’s crash of a C-130 in Mississippi that killed all 16 service members. Before that, Bert missed airshows while undergoing an extensive overhaul.

At this time, the acquisition and delivery of the new C-130J is still in the planning stages. It is unknown when the new Fat Albert will be obtained by the team, let alone resume flying. It is also yet to be confirmed that the aircraft will don the famous blue and gold colors once acquired, but the fact that this is a permanent solution is promising.

We may very well be in for an entire show season without Fat Albert. Although disappointing for the fans, it is even harder on the team as they need to rely on other transportation. It may even lead to more broken jets as the team struggles to get spare parts in time to perform.

Stay tuned to AirshowStuff for updates on this developing story, and add your own thoughts in our forums!

Also take a look at the Blue Angels 2018 airshow schedule!